It is our pleasure to host you in the beautiful halls of Tavern Yerevan restaurant where you will appear in an unmatched environment offering an excellent combination of price, quality and service. The menu of the restaurant includes a number of dishes, some of which have endured for centuries as the favorites of Armenians and are still on the list of the most popular dishes. When preparing our menu we were guided by a simple principle-to offer a purely Armenian cuisine that will feature forgotten or almost forgotten dishes. We have also included the best samples of the

Caucasian cuisine that are suitable to our customers’ taste, but are also unique and somewhat different.

Our success is triggered by the highest quality and variety of the dishes we offer. We do our best to review the restaurant’s menu regularly, we use only the freshest products to prepare our dishes that represent the essenses of the culinary art and last but not the least –we make sure our waiters and staff in general are well trained, well-behaved and are able to deliver good service. The interior design of Tavern Yerevan stands out by its harmony, the comfort it offers and its unique decor and as such can satisfy even the most demanding customers. You will feel at home and at ease here, wrapped in attention you will taste the unparalleled assortment of Armenian dishes while also enjoying the subtle melodies of the national music.

Visit Tavern Yerevan where you can hold business meetings, have celebrations and events and unforgettable family gatherings.

The flavor of Yerevan!

I think that it is due to the many dishes made of fresh meat that the flow of customers to Tavern Yerevan never slowed down in the past ten years. Our customers do believe that whatever they order in our restaurants is made of fresh and high quality meat.

I would like to share with you a few principles that guide us in our choice and use of meat products.

It should be noted that the beef we serve comes from up to 100 kg young bulls that are fed only with bareley, alfalfa and water. The meat of an animal that was raised using this diet is significantly different from other beef in regards to taste, softness and tenderness. It also differs in its rosy color. Our meat suppliers are mostly from Yeghegnadzor. The meat of the cattle raised in that region is different from that of other marzes/regions in terms of taste.

With regards to pork our restaurant is also very selective. We only serve the meat of female pigs that are up to 30 kilos and are kept in pens with special conditions. These criteria are essential as they result in softer and tenderer meat qualities with no odor specific to pigs and with a balance between meat and fat, a feature which is highly valued by cooks in regards to pork.

And finally, the mutton dishes served in Tavern Yerevan are very popular with our customers because of the simple fact that we use the meat of lamb that weights no more than 11 kilos and has tender meat and pleasantly palatable taste. Lamb meet is supplied to our restaurant from Syunik, where its mild climate, its water and air, its herbs known for their healing qualities have a very positive effect on the quality of the lamb. Tavern Yerevan has created partnerships with a number of lamb breeding farms operating in this region.

I would also like to say a few words of special acknowledgment about our cooking/chef staff, all of whom are high professionals with many years of experience of working in European and Asian countries that adds up to their knowledge and skills. It is because of their devotion to the work they do that they do not just prepare dishes, but create species of culinary art.

And finally, I offer you a recipe from Tavern Yerevan’s menu with the hope that it will become one of your favorite dishes that you will cook regularly.

The veal should be beaten until it becomes as thin as 0,5 cm. and then be fried in olive oil. After that you fry the mushrooms in the same oil. The mushrooms are arranged on the meat pieces and 40 grams of Dutch cheese is added. To prepare the sauce you put 30-50 ml of water in the same pan and cover it with the lid to cook for around a minute. Then you add the nuts to the water, a little amount of flour and mix it. Add a teaspoonful of sour cream and pour the sauce on the meat. You can serve any side dish with the meat.

Yerevan has a picturesque panorama, which is surrounded by a four peak Mount Aragatsand Mount Araand on the MountArarat on the south. It is not surprising that the Biblical Mount Ararat is a symbol of Yerevan that resembles an eagle in the sky. According to archeological, geological and paleontological research all ancient monuments and fragments found in Yerevan have an antiquity of more than a million years. Preserved monuments of Stone Age and Early Iron Age, indicate the stages of human development.

In is only natural that throughout many centuries, not all the monuments could be preserved, as Armenia in all ages of its history has served as a link in an international exchange, and that very same privilege made Armenia the bone of contention between every fighting power of East and West.

Urartian king Argishtithe first built a citadel called Erebuniin 782 BC. The name of Yerevan the 12 capital of Armenian and the present day capital city got its name from Erebuni. This is evidenced by the Urartian cuneiform, which is considered the birth certificate of Yerevan. Indeed, Yerevan is one of the oldest cities in the world; even the "Eternal Rome" is 28 years younger than him.

Since 1918, Yerevan is the capital of the first, second and third Republic of Armenia. During that time Yerevan has been in the turmoil of fate, not once but many times. This is evidenced by the traditional architecture, which includes and compares different styles of construction, which presents specific and often unexpected pattern, sometimes even contrasts.

The History of Armenian cognac began in 1899, when the first guild merchant Nikolai Tairov (Tairian) builtthe first Brandy Factory in the Russian Empireon the site of the old Erivan fortress. Nikolai Tairov was unable to settle marketing and sales, thus he sold his business to the Russian manufacturer Nikolai Shustov.

He reconstructed the factory and took his product to the market with some advertising. As a result Shustov’s product was well positioned in the Russian market.

In 1918 Shustov’s cognac was presented at the Paris exhibition, where he was awarded the Grand Prix. In sign of respect to the quality of the product Shustovwas allowed to sell his product under the name of cognac and not brandy, as was customary to call all alcoholic drinks made from grapes that are not grown in the Cognac region. In 1913 "Shustov and Sons" was honored to become a supplier of the Court of His Imperial Majesty, and thus the Armenian cognac found recognition.

After World War II, in 1945 a special cognac name "Dvin" was releasedfor the Yalta Conference in Armenia. During the conference, Sir Winston Churchill, asked Stalin to sell him a batch of bottles of “Dvin”. Since then, regular supplies of "Dvin" to the British Prime Minister were controlled by the "Leader of Nations" in person. When Churchill was asked the secret of his longevity, he answered without hesitation: "Never be late for dinner, smoke Cuban cigars and drink Armenian cognac!" Legal deliveries to England continued until the beginning of the Cold War.

Armenians have been growing apricots for around 3000 years. Apricot is mentioned in Armenian as well as in other sources. For example, during excavations of the Garnitemple some apricot stones were found. This fact is also evidenced by the painting of King Sargon 2 of Assors. It is mentioned there that he grew apples and apricots.

The word "apricot" has an old history. Romans called apricots the"Armenian apple". That is the same name that was kept in biology. In Latin apricots are called Prunus Armeniaca or Armeniaca Vulgaris.

Apricot fruits contain a lot of health-giving substances. People often use this fruit in cases of cardiovascular diseases and malfunctions of liver and kidneys. It is a very high-calorie fruit and he has great palatability. Apricot fruits contain starch, organic acids, vitamin C and other nutrients. Apricots are used to make drinks, juice, jam, marmalade and candied fruit. Some varieties of apricots have sweet stones which are used in sweets production.

Apricot wood it used to manufacture the most popular Armenian musical instrument called duduk. Presently apricots are being grown in many other countries, but the apricots grown in Armenia, where the isArmenian sun and water, give the Armenian apricots a special and unique taste.

Duduk is the oldest and the most favorite Armenian musical instrument. It fully expresses the feelings and emotions of the Armenian people. The instrument has a history of 1,900 years.

Despite the fact that the dudukis played in many countries of the Caucasus, his homeland is Armenia. Since duduk is made of apricot wood it is often called "tsiranapoh." The uniqueness of dudukin in the lyrical, gentle and warm sound. No other musical instrument can express feelings as sincerely and warmly as the duduk.

On the front side of the instrument, there are seven holes, and only one on the back. Usually, both performers play simultaneously. The first one plays a solo, and the second accompanies playing monotonous sound. For dance music duduk is joined by percussion instruments. In Armenia, the most famous player of duduk is Jivan Gasparyan. You will hear duduk sounds in many Hollywood and other films such as "Gladiator," "The Last Temptation of Jesus," "The Raven," "Xena - Warrior Princess," etc.

The cuisine of a region is part of its larger culture and an evidence of the preferences that evolve with time due to contacts and historical developments. Being a unique part of the national identity the cuisine also experiences different influences and cannot be restricted by the traditions of one culture or one nation. Probably this is why since Tavern Yerevan’s foundation we tried to combine the best traditions of Armenian and Caucasian cuisines in our restaurant. Many of the Caucasian dishes have been accepted by Armenians with time and have become an integral part of the Armenian menu. Since, the very beginning our mission was to offer our customers dishes that are palatable for our customer from both culinary and cultural perspective, but are also slightly different. This is, though, only part of our comprehensive approach. At Tavern Yerevan we use the highest quality fresh products supplied by our partner farmers and producers. We are extremely consistent in ensuring highest professionalism and service quality of our serving staff.

With regards to pork our restaurant is also very selective. We only serve the meat of female pigs that are up to 30 kilos and are kept in pens with special conditions. These criteria are essential as they result in softer and tenderer meat qualities with no odor specific to pigs and with a balance between meat and fat, a feature which is highly valued by cooks in regards to pork.

I would like to believe that thanks to this approach Tavern Yerevan has become the embodiment of delicious food and a pleasant environment for many of our customers. Quoting one of our customers, “We feel at home here, as this is a place with an easy environment where fresh and tasty food is always in supply”. 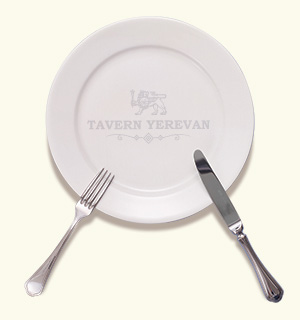 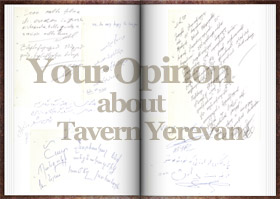 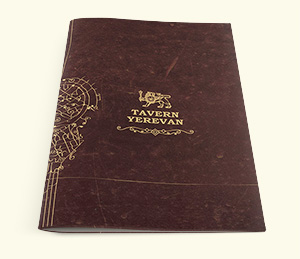